Guesthouse of the Year 2022 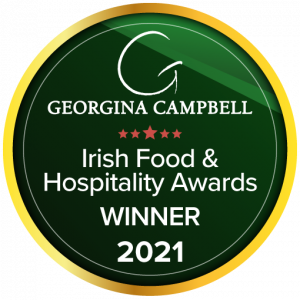 We were so honoured and humbled to be awarded the honour of Guesthouse of the Year by renowned food and travel writer, Georgina Campbell in her 2021 Irish Food and Hospitality Awards 2021.

Georgina Campbell, is President of the Irish Food Writers Guild and is a very well respected and renowned travel & food writer, writing for both national press and her own Georgina Campbell guide. Her eponymous Awards are now in their 23rd year and award winners are selected by incognito inspectors and aim to honour Ireland’s standard-bearers in the food and hospitality industry.  Georgina described this years awards as “ a kind of love letter to the Irish food and hospitality industry”. Georgina added that despite everything that the industry has gone through in the last 18 months, that Irelands food, tourism and hospitality is an exciting and ever developing story.

Staying “ in tune with the times” and focusing on sustainable development, sourcing ethically, and on those who not only survived but thrived during the pandemic . Georgina added “ I am lost in admiration for all of the brave and dedicated people in the sector who have stretched themselves to their limit to keep their businesses – many of them family owned – going “.

For us at Castlewood House this is such a huge honour as we have known Georgina for many years and have featured un her guide pretty much since we opened.  To win this award, in such a personally tough year for us, has really so special. We are in in awe of our colleagues in the industry all around Ireland who pivoted and became incredibly creative during the past two year and we look forward to working with them all into the future.