The Slea Head Drive is one of the “ Must” see drives on the Dingle Peninsula and one of the most iconic in Ireland. It takes in magnificent scenery, film locations, beaches, history, and amazing views of the Blasket Islands. It is also one of the drives that you will remember for the rest if your life.

The Slea Head Drive (Slí Cheann Sléibhe) is a circular route, which is part of the Wild Atlantic Way. The drive begins at Milltown Bridge, located just beside Castlewood House, and takes you on a circular road beginning and ending in Dingle town. The route is clearly signposted and although it is only 30 miles/45 km we would advise allowing half a day to take your time to enjoy it as there are so many places you will want to stop and spend time at along the way. We advise taking a clockwise route as this will minimise meeting oncoming vehicles along the narrower stretches of the route.

We put together this route guide which breaks the drive into sections which will ensure that you make the very most of your experience. 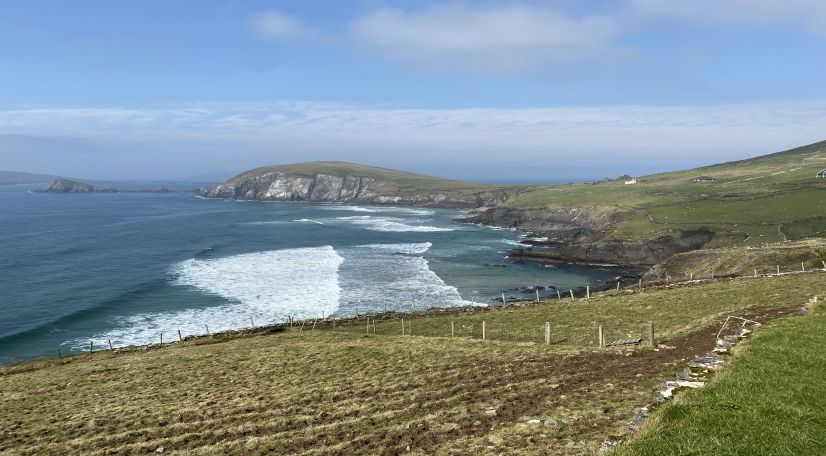 Dingle to Ventry – Ceann Trá
On leaving Dingle follow the signs for Slea Head Drive R559 in the direction of Ceann Trá – Ventry. The Drive passes Castlewood House on the right and passes over Milltown Bridge, past the Dingle Distillery and past the forested area at Burnham ( Eask Tower is the tower you can see from Dingle at the top of the mountain) to Ventry – Ceann Trá. This village has the most magnificent crescent shaped beach which is sheltered and just a lovely place for a stroll on the sand.

Ventry – Ceann Trá to Fahan
On leaving Ventry the continue westward past the remains of Dunbeg Fort, and also the Famine Cottages and then you will Fahan group of Beehive huts. There are lots of places to stop your car and take in the breathtaking views or to visit the sites. On a clear day you can see Skellig Michael in the distance. The drive continues with a sheer cliff on one side and the Atlantic Ocean on the other. At Fahan there is a bend where the water flows down from the mountain across the road and down to the sea. 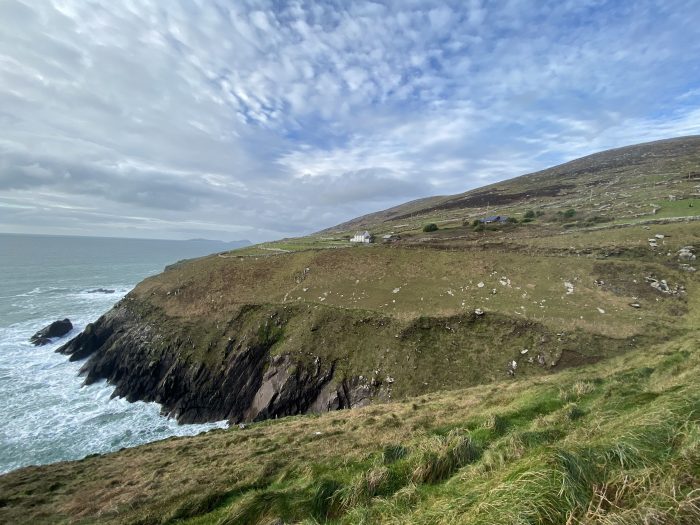 Fahan to Slea Head
The Drive now reaches Slea Head itself, marked by a stone crucifixion scene, with dramatic views to South Kerry and the Blasket Islands. We really recommend stopping here and taking in the views which are just breath-taking. 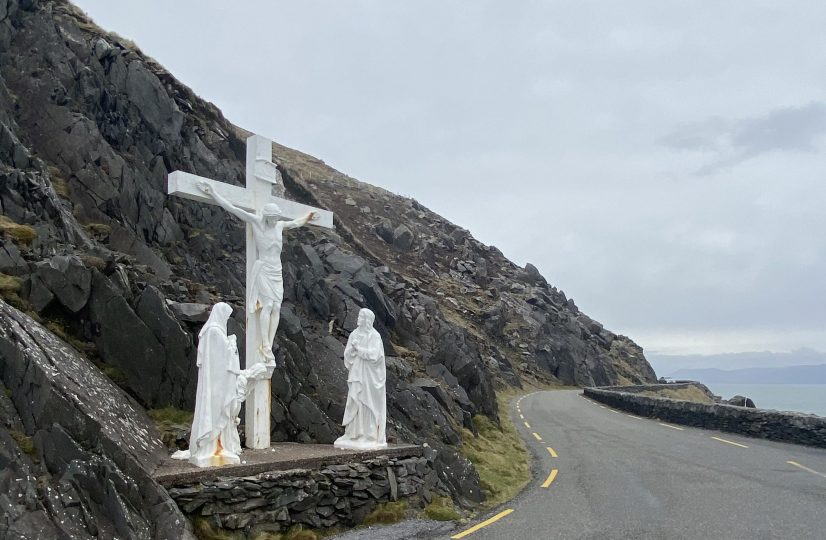 Slea Head to Dún Chaoin – Dunquin
The Drive now follows the coast north, towards Dunmore Head and the little beach to your left nestled in the coastline is Coumenoole Strand, where some of the filming of Ryan’s Daughter took place. This s a truly beautiful place to stop and spend some time. Continue on towards Dunquin ( Dún Chaoin) and the iconic pier where the passenger ferry to the Great Blasket / An Blascaod Mór runs from Dún Chaoin pier between April and October. Take the time to walk down to the pier, it is a pretty steep climb back up but so worth it The Blasket Centre, or Ionas an Bhlascaoid, which is the heritage centre for the Islands is also located just outside the village. 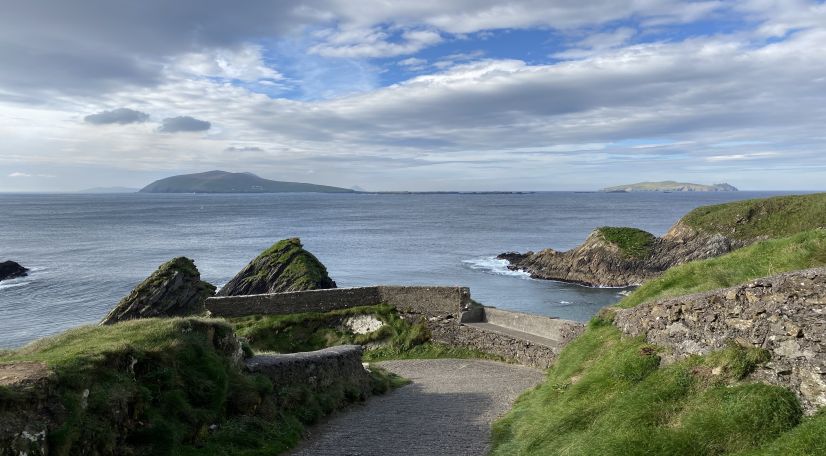 Dún Chaoin / Dunquin to Baile an Fheirtéaraigh / Ballyferriter
The Drive continues north and east from Dún Chaoin through wild open countryside, passing Clogher Head and a great viewing point for Ceann Sibéal (Film locations for Star Wars) Another stop along the way is Louis Mulcahy Pottery. From here the road moves inland to the village of Baile an Fheirtéaraigh / Ballyferriter. The village has several bars, a shop and is the site of the Corca Dhuibhne Regional Museum. 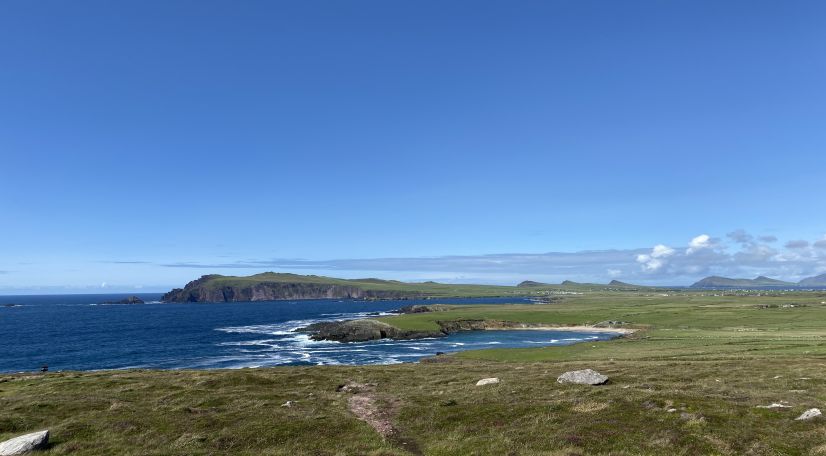 Baile an Fheirtéaraigh to Baile na nGall / Ballydavid
The Drive now moves eastward, passing close to several ancient monuments, such as the excavated early Christian site at Reasc, and Gallarus Oratory. At the village of An Mhuirioch you can decide to take a right and head towards Kilmalkedar Church or left and travel to the fishing village of Baile na nGall/Ballydavid. On leaving the village the drive again follows a cliff-top route, which is just stunning overlooking the Atlantic Ocean and the cliffs

Baile na nGall / Ballydavid to Dingle
At An Fheothanach/Feohanagh you cross a little metal bridge and the route brings you to Cuas an Bhodaigh or Brandon Creek which is the legendary starting point of the voyage of St Brendan to America, centuries before Columbus. The Drive then continues south and runs along the base of Mount Brandon, which is the second highest mountain in Ireland. The route to the mountain’s summit begins near here and is well signposted. The Drive now re-joins the main road south to Dingle, passing over a hill’s crest at Ballinlochaigh and arriving back at the roundabout at Milltown just before Castlewood House. 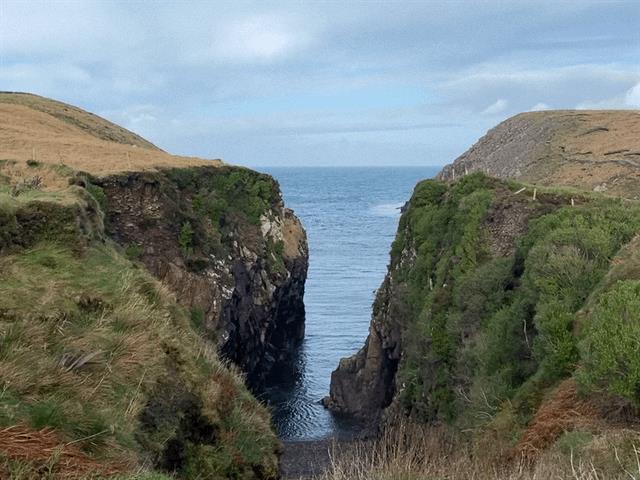 A few hints on Driving the Slea Head Drive
Travel in a clockwise direction.
As this is a working rural area please be aware that there may be farm animals on the roads as they are moved from one grazing area to another
The roads on the peninsula are country roads and there may be delays in areas so please take your time and allow for cyclists and walkers. There are also a few schools on the route so please drive with caution.